[Stripe] Orders going through stripe, but not creating orders in Magento

We’re having some trouble with some cases where a invoice gets paid in Stripe, but the order does not get created in Magento. When this happens we get the two following, but different exceptions that have both caused the same problem.

If you need logs from Stripe I can send them privately and without any sensitive information.

There might be some other exceptions as well, but these are the two different types I’ve been able to find so far after having a look through orders and Stripe side-by-side.

These failures are not related to your Stripe problem, I have described it here: Zend Framework 1 bug: «The locale ‘’ is no known locale».

invoice gets paid in Stripe, but the order does not get created in Magento

Prove it with screenshots.

Okay, so the first error is a Zend issue when you call “new Zend_Date” in side “df_date_reset_time”? I can understand that’s not your domain.

But what about the second error? In hindsight I can see that these two should have been two separate issues even tho they produce the same problem.

I dont know what this could be as it’s in cyrillic. But I understand it could have something to do with Puerto Rico and it being a US state or something?

Here’s the proof through a screenshot containing both the stripe dashboard and the Magento order list. This is from the “PR” and “en_US” problem and not the “locale” problem.

On the left is the Stripe dashboard’s Payments view showing orders XX544 - XX547 being paid. In Magento you can see that there is a space between order XX543 and XX548 where the orders should be. There is no invoices in Magento for these orders either. I also think the customer is not getting a proper error on his end as he apparently kept trying 4 times, creating the same error on all 4 attempts.

Where is the proof on your screenshots that the problem order is from Puerto Rico???
Can you be always concrete in your words and always proof your words without my additional notices?
Then you tell something - prove it.
Do not tell something that you do not prove with a screenshot attached.

First of all, I find this a incredibly unprofessional way to ask for more information about a problem… I can see no benefit I would have to gain from hiding that a order was from Puerto Rico and add to that that I’ve already provided the information in the files attached previously.

I’ve given you the full exception logs and the response Stripe provided but removed detailed information about the order as I don’t want to share a customers address on a website open to anyone. Inside “stripe_response.log” there is a reference to “Puerto Rico” in the shipping address.

I am only guessing that Puerto Rico is even relevant at all, because of the “PR” and the “en_US” in the exception message and from trying to use google translate on it.

But here’s a screenshot of the payment from Stripe for one of the attemps the customer tried as well, as the log isn’t enough… 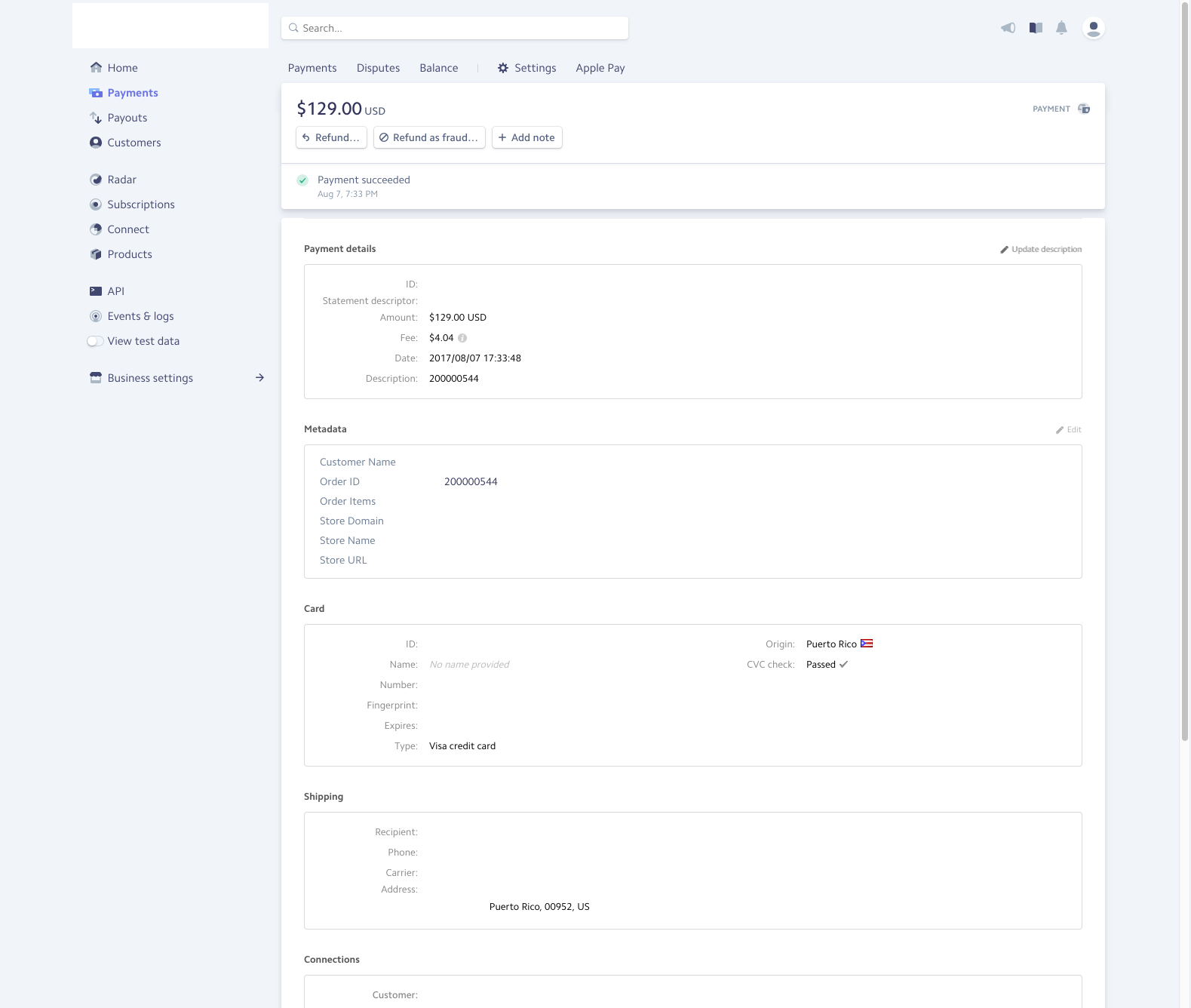 I have the same issue with Stripe, during the Christmas period with a ratio of 6/10 orders not created but payment taken by stripe.
thinks that the problem is A Really poor integration and Zero support from Stripe it self.